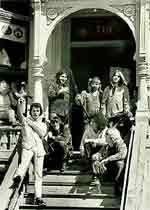 Much due to the media, people see the hippies as a group from the 1960's that no longer exist.

This is not so.

Being a hippie is a lifestyle choice that was made before the 1960's and is still made by many today.

(Who could that be standing on the left at the top of the steps?)

According to Aron 'Pieman' Kay, who famously threw a pie in Richard Nixon's face, the hippies are still everywhere- whether it be the streets of Haight, the Rainbow gatherings, the web or just when I least expect it, I will meet an old timer on a New York City subway. Furthermore, another hippie from the 1960's added. Protests are still going on for more or less the same things. And as far as clothing, there is still the Salvation Army clothing store. About the only major changes here are satellite TV, microwaves, and the computer. Hippies are more than a part of a counterculture movement, they are a recurrent subculture. (...more)
Posted by Emerson Crossjostle