reflections from a psychedelic grandmother... 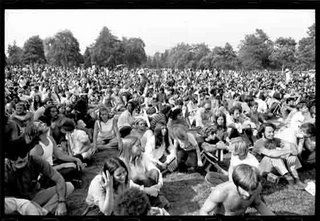 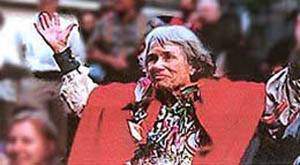 "The first great recognition of how many of us there really were sharing this mystical,
wordless and magnificent experience of the Rainbow Heart,
the infinitely manifest,
the wonder and magic of being-ness
beyond the individual ego,
was the
First Human Be-In,
January 14, 1967.

It was not the speeches of Ginsburg,
Suzuki Roshi,
Leary and the other speakers on the platform
or even the music that touched us with mystic wonder.
The wires were cut, and for a long while there were no speeches, no music.
Only the murmur of 25,000 people,
most of them on LSD,
grooving with each other,
with the sunshine which had come in the midst of a rainy month,
and with the manifest presence of Spirit.
It was so quiet.
Women in lace table cloths, long dresses of oriental fabric,
fantasies from every age and place moved gracefully through the silent crowd.
Men in pied patterns smiled at the sky.
The Diggers gave out turkey sandwiches.
Everybody shared marijuana, apples, LSD and love.
We knew that we were witnessing a massive blossoming of a new religion
in the literal sense of being tied together again.
This religion would never have churches or temples;
this was a religion based on individual freedom and respect;
we "dug each others vibes"
and felt the coming together of an ancient family.
Time dwindled to a no-point.
Heart reached to heart in an almost
soundless outpouring of love.
So when the music and the speeches started,
when the mantra and the rock resounded,
it was an ecstatic exclamation point on a massive experience.
Call it heaven or samadhi;
it set the parameters for a whole movement during the Summer of Love.
Through the catalyst of LSD we had scratched through the surface
of our separateness and recognized ourselves,
our surroundings, all things as One.
That afternoon, we
truly became
The Love Generation."

This is an excerpt from an essay that Elizabeth wrote, published in Psychedelic Illuminations Magazine.
It is included in Scrapbook of a Haight-Ashbury Pilgrim by Elizabeth Gips.
Posted by Emerson Crossjostle